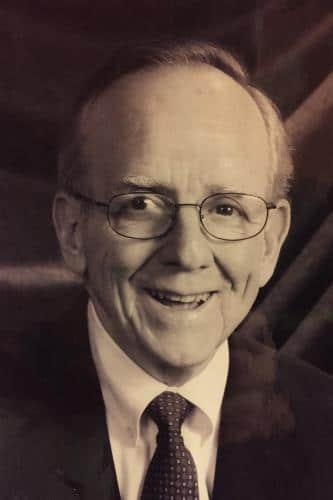 Dr. Christopher Kauffman, educator, scholar, mentor, husband, father and family man passed into the hands of God, surrounded by his loving family on January 30, 2018. In his 81 years Kauffman, through his teaching, numerous publications, both articles and books, and his inauguration and editorship of the U.S Catholic Historian, made an indelible mark on the education of future scholars as well as advancing the study of American Catholic history.

Born on October 9, 1936 in St. Louis, Missouri, the youngest of four children of Dr. Daniel Emmanuel Kauffman and Bernice O’Brien, Kauffman was raised by his mother and maternal grandfather, Christopher O’Brien, due to the premature death of his father when he was only an infant. He was greatly influenced by his grandfather who, while serving as a surrogate father, provided the guidance and mentorship his grandson needed in many aspects of his life, including faith. As a youth, Kauffman daily observed his grandfather praying the rosary on his knees. Kauffman was totally devoted to his family, beginning with his mother, whom he visited regularly until her death in 1987 and his three siblings, Margaret Abel and Jack Kauffman, who preceded their brother in death, and his eldest brother, Daniel Kauffman, presently residing in Georgia. While his mother kept the home fires burning as a principal distributor of Catholic school uniforms, young Chris attended parochial schools, including the Christian Brothers Academy, in Clayton, Missouri. As a youth he was an avid reader and, recognized by his teachers as one with exceptional aptitude, he thus was encouraged by his teachers to read books which were advanced for his age. While attending high school, he encountered his great academic mentor, Justus George Lawlor who encouraged him to attend St. John’s University in Collegeville, Minnesota, from which he graduated in 1958. Lawlor continued to serve as a mentor for Kauffman throughout the latter’s career. Returning home, Kauffman completed master (1961) and doctoral (1970) degrees at St. Louis University.

After completing his master’s degree, he began his career as an educator, initially for several years at Mercy High School and then for short periods of time at Fontbonne College for women, Marillac College, and St. Louis University. In the early fall of 1966 he met Helen Schaberg.  After a short courtship they married on December 26, a convenient time since both were teachers enjoying the Christmas holiday.  Together they brought into the world their three children Jane Kauffman Marinelli, Christopher Justus Kauffman and Katie Kauffman.  Over the years their family expanded with seven grandchildren. From Kauffman’s perspective, one of the truly great joys, especially from the influence of his grandfather, was being called “Grandpa.”

Christopher Kauffman’s first significant foray into American Catholic history was through a series of institutional histories that he was commissioned to write. His first monograph in this genre was a two-volume history of the Alexian Brothers (1976).  Moving to Connecticut, he next produced a centenary history of the Knights of Columbus (1982), plus an update and addition 10 years later. The family’s last move too them to Baltimore, where he completed a history of the Society of St. Sulpice (1989).  As his career continued he penned an authoritative history of the Cathiolic Health Association of the United States (1990), a biography of William Howard Bishop, the founder of the Glenmary Home Missioners (1991), and a history of the Marianists in the United States (1999).  While these monographs were significant, arguably his greatest contribution in this scholarly format was his editorship of two multi-volume works which encompassed a broad range of topics associated with American Catholic life. His award-winning six-volume Bicentennial History of the Catholic Church in America (1989) authorized by the National Conference of Catholic Bishops (NCCB) was followed, beginning ten years later, by his nine-volume American Catholic Identities: A Documentary History (1999-2003).

In September 1989 Christopher Kauffman began another important phase of his life, taking the position as the Catholic Daughters of the Americas Chair in American Catholic History at The Catholic University of America in Washington, D.C. Teaching there until his retirement in 2008, he served as professor, mentor, and friend to many students, and guided numerous men and women to the completion of their doctoral dissertations, including the writer of this memoriam.  In addition to his teaching responsibilities at the University, Kauffman served as President of the American Catholic Historical Association (ACHA) in 2004.  He was awarded emeritus status from Catholic University in 2014.

Kauffman’s career as an educator and array of monographs and multi-volume publications was certainly matched if not exceeded by his composition of over 100 scholarly articles, covering topics as wide-ranging as an analysis of a proposal for the ordination of women, the early history of The Catholic University of America, the work of Catholic Relief Services in Vietnam, plus numerous articles that addressed topics related to his monographs. While these individual contributions of research and writing are highly significant, his editorship of the U.S. Catholic Historian from 1983 to 2013 may be his greatest contribution of all. Focusing on various topics for the individual issues of this journal, Kauffman brought to light stories of American Catholics that heretofore had been underrepresented by historians, including women, African-Americans, Asian-Americans, Latinos, and those on the frontier and borderlands.

Beyond the halls of academia, Kauffman reveled in his family life. His commissioned histories allowed him to travel with his family to Europe, especially Germany and France. The habit he had from youth of being an avid reader continued throughout his life. He was particularly attracted to murder mysteries. More recently he began to write poetry.  He was described by his friends as a very sociable individual, making friends easily and always enjoying the opportunity to entertain people in the family home. Certainly the academic community, especially those of us who study American Catholic history have lost a giant and a friend. He has left a great legacy behind, forging a path that we, his students and those who have benefited from his scholarship and friendship, should be very glad to follow.

Donations to the Christopher J. Kauffman Prize in U.S. Catholic History should be sent to Tricia Pyne, Associated Archives at St. Mary’s Seminary & University, 5400 Roland Ave, Baltimore, MD  21210. Please make checks out to: Tricia Pyne with Christopher Kauffman Book Prize noted in the memo line. The prize will be awarded through the American Catholic Historical Association.