The American Catholic Historical Association is pleased to announce the winners of two book awards for 2013: 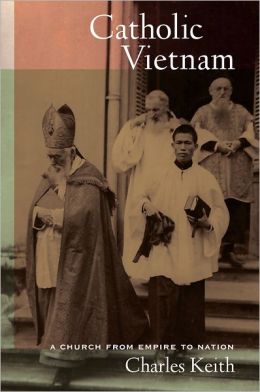 Shea Prize: Charles Keith for ‘Catholic Vietnam: A Church From Empire to Nation

The members of the John Gilmary Shea Book Prize committee are pleased to announce that Professor Charles Keith’s “Catholic Vietnam: A Church From Empire to Nation” has been awarded the 2013 Shea Prize for the best work in Catholic history. The committee remarked:

Charles Keith, in Catholic Vietnam, examines how Catholicism influenced Vietnam’s transition from colony to sovereign nation.  He argues that Vietnamese efforts to form an independent national Church helped reimagine their relationship to the French colonial power and redefine their identity as a nation.  This book complicates the well-worn view that Catholicism in the age of imperialism served simply as a defender of the imperial order, demonstrating the complexity and ambiguity of circumstances on the ground in Vietnam. Keith puts the spotlight on Vietnamese Catholics who asserted their joint religious and national identities in navigating the conflicts between imperial authority and local resistance.

The conflicts heightened during the First French Indo-China War. As French defeat became imminent, massacres of Vietnamese Catholics occurred as did large scale migration to the south. The Vatican sought to support Catholics in Vietnam and at the same time fiercely opposed communism in the north. Throughout these struggles, Vietnamese Catholics since the late nineteenth century pushed for a national church independent of French missionary control. The Vatican remained a strong ally in this movement and in the 1960s granted the Vietnamese Church status as a fully self-governing church under the authority of Rome.

Drawing from a wide range of sources in Vietnam, France, and Italy, Keith traces the development of a religious and cultural self awareness among Catholics that connected them to the universal world of Catholicism yet also set them apart from it. Meticulously researched and carefully narrated, Catholic Vietnam is an outstanding book with an important story to tell.

The Shea Prize is given annually to the author of a book, published during a preceding twelve-month period, which is judged to have made the most original and distinguished contribution to knowledge of the history of the Catholic Church.

The members of the Howard R. Marraro Prize Committee have announced that the 2013 Marraro Prize has been awarded to Areli Marina of the University of Illinois at Urbana-Champaign for The Italian Piazza Transformed: Parma in the Communal Age (University Park, PA: The Pennsylvania State University Press, 2013). The prize is given annually to the author of a book dealing with Italian history or Italo-American history. It is named in memory of Howard A. Marraro (1879-1972), who was a professor in Columbia University and the author of more than a dozen books on Italian literature, history, and culture.

Dr. Keith, Dr. Marina, and all ACHA annual awardees will be honored at its annual luncheon to be held on Saturday, January 4, 2014, at the Marriott Wardman Park Hotel, in Washington, D.C. during the Association’s annual meeting. The luncheon will be held at 12 noon.