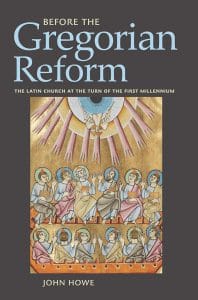 Howard R. Marraro Prize in Italian History presented to John Howe, Before the Gregorian Reform: The Latin Church at the Turn of the First Millennium (Cornell University Press, 2016).
In this learned, wide-ranging study, John Howe boldly reframes the long tenth century, not as a fallow interval in the history of the Latin Church in Western Europe, but as period whose creative ferment made the Gregorian Reform possible.  Howe deploys his arguments with exemplary economy and clarity, calling attention to the significant roles played by actors inside and outside the Church, and to the value of exploiting visual and material evidence alongside textual sources.