The ACHA Graduate Student Summer Research Grant was essential in allowing me to complete research on the final chapter of my dissertation, entitled “‘I Was a Stranger and You Welcomed Me’: Latino Immigration, Religion, and Community Formation in Milwaukee, 1920-1990.” Working at the intersections of immigration, working-class, and religious history, my dissertation follows the lives of Latinos and the religious communities they built in Milwaukee between 1920 and 1990. Focusing on Mexican, Puerto Rican, and Central American immigration, I examine how the movement and reordering of people, faith, and cultural practices drove the creation of spaces that facilitated cross-cultural, intracultural, and transnational interaction throughout the city. While studying the spiritual underpinnings of the lives of Latinos who made Milwaukee their home, my study also investigates how the religiously devoted used sacred belief to better understand the secular world in which they lived through community-crafted social justice movements grounded in shared values and morals. 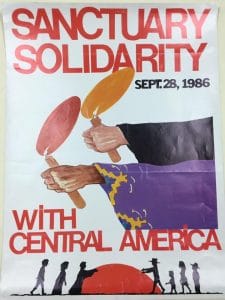 The final chapter of my dissertation charts the emergence of the Sanctuary Movement in Milwaukee throughout the 1980s. In 1982, Milwaukee Archbishop Rembert Weakland became the first Catholic prelate to declare a Catholic archdiocese as a sanctuary for refugees fleeing political persecution from Central America. The city’s participating interfaith organizations drew upon transnational religious beliefs to aid political and religious refugees arriving in the United States. For Milwaukeeans and refugees alike, the movement became more than just a practical effort to aid political refugees and affect foreign policy. Through civil disobedience justified through Scripture, groups developed alternative forms of consciousness that affirmed individual and collective identities while formulating a politicized devoutness that was both individually and collectively expressed.

Resources from the ACHA Graduate Student Summer Research Grant supported my research in the papers of Darlene Nicgorski, a leader in the national Sanctuary Movement, held in the Special Collections of the Claremont Colleges’ Honnold/Mudd Library in Claremont, California. A Wisconsin native and member of the Milwaukee-based School Sisters of St. Francis, Ms. Nicgorski became a national figure in 1985 when she was among sixteen activists arrested and charged for aiding Central American refugees find protection in the United States. After deciding to leave the School Sisters shortly after the conclusion of the trial, Ms. Nicgorski went on to become a language teacher and human resources specialist before retiring in Claremont.

I did my best to work through fifteen archival boxes in what felt like a very short week in the archives. Ms. Nicgorski’s papers include personal correspondences, court documents, audio-visual files, photographs, periodicals, and ephemera such as t-shirts, buttons, and posters. I spent the majority of my research time analyzing correspondences between Ms. Nicgorski and the School Sisters of St. Francis, particularly through the harrowing 1985 trial that prompted the order to mobilize the support of thousands of nuns throughout the United States. Heartfelt letters from school children, old acquaintances, and strangers voicing support for Ms. Nicgorski from around the country demonstrated the deep impact and consciousness-raising potential the Sanctuary Movement’s refugee assistance had on religious communities throughout the 1980s.

Personal correspondence, court records, and newspapers can’t illuminate the religious lives of people alone, and as such my research relies heavily on the voices of Latinos who decided to make their homes in Milwaukee as well as their allies in different communities across the state and country. I was fortunate that Ms. Nicgorski was more than willing to meet with me during my research trip to discuss her activism and faith. Over the course of multiple hours of oral history interviews, we covered a wide range of topics including her early life in Milwaukee, missionary trips throughout the United States and Guatemala, her work aiding refugees through the Chicago Religious Task Force for Central America, the 1985 trial, and her life after having left the School Sisters of St. Francis. It is my hope that the oral histories we collected will better illuminate the ways in which Ms. Nicgorski’s belief in liberation theology-centered acompañamiento guided her work with Central American refugees throughout the 1980s.

I’d like to thank the ACHA not only for providing the financial resources that made this impactful research trip possible, but also for having faith in the potential of my work. The ACHA’s support has been crucial in helping me further connect my dissertation’s guiding themes of religion and community formation with contemporary issues of citizenship, belonging, and social justice in order to chart how Latino immigrants continue to transform the American religious landscape to this day.