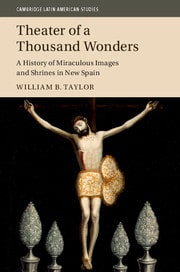 The 2018 John Gilmary Shea Prize awarded to William B. Taylor, for Theater of A Thousand Wonders: History of Miraculous Images and Shrines in New Spain (Cambridge: Cambridge University Press, 2016).

This magisterial study takes as its subject the transformation, through Catholic devotions, of the landscape of the New World in the colonial period. Taylor’s principal concern is to demonstrate how different strains of early modern piety became rooted in specific places in Mexico, and why certain practices flourished over the first three hundred years of that nation’s history. In addition to considering shrines large and small, he explains the place of miracles, of pilgrimages, of the promotion of shrines in print, and of the role of devotional images in the elaboration of a new spiritual geography. Rooted in decades of archival research and in a deep knowledge of religion in colonial Mexico, Theater of a Thousand Wonders challenges facile interpretations of devotional behaviors and of the fluctuations in popularity of different shrines.Rather than seeing simply the substitution of one form of religious behavior for another in the wake of the Spanish conquest, and a mirror for metropolitan devotions, Taylor demonstrates how Mexican shrines and devotional practices diverged from their Spanish sources in ways that were unique to New Spain. These differences in behavior, amply adduced by records as diverse as hagiographic texts, Inquisition records, confraternity archives, as well as artistic and architectural evidence, reveal the tensions between popular spirituality and official desires, as well as the competition between religious orders to harness the wellsprings of devotions across the colony.

In sum, Taylor’s study is a profound meditation on the presence of the holy in New Spain and how Mexicans responded to it over the span of the colonial period. Owing to its skillful deployment of a massive quantity of data on lived religion in New Spain, as well as to its elegant analysis of the pious practices of colonial Mexicans, this work amply merits recognition with the 2017 John Gilmary Shea Prize.